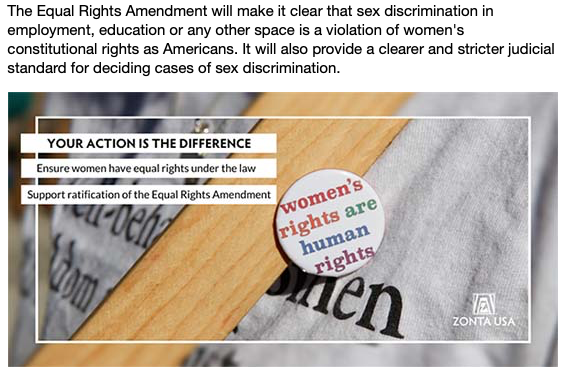 The Equal Rights Amendment is valid as the 28th Amendment to the U.S. Constitution

The Zonta USA Advocacy Caucus and the ERA Coalition has declared that the Equal Rights Amendment is now in effect. It has satisfied all requirements set forth in Article V of the Constitution to be added as the 28th Amendment. The ERA was passed through Congress with well over the required 2/3 majority vote and sent to the states in 1972. On January 27, 2020, Virginia voted to become the 38th and last needed state to meet the 3/4 state ratification requirement. According to Section 3 of the Equal Rights Amendment, which stipulates a two-year waiting period from the date of ratification, the ERA is now officially in effect and will immediately be used to:
Celebrate the ERA!

Twelve days from now, on March 1, 2022, President Biden will deliver his first State of the Union address to the nation. In it, he will certainly discuss so many of the challenges we are facing as a nation, from inflation to COVID-19 to the economy. But, one thing we hope he will make time for is one that impacts all the others – equality for all.

That’s why we are calling on the President to make his support of the ERA clear in his remarks to Congress on March 1st. Join us in asking President Biden to reinforce his support for the 28th Amendment and clear any obstacles in its way.

This is cause for celebration. We still want to clarify some points, even though they aren’t necessary.  Further efforts will be made by the Caucus and the Coalition to remove any ambiguity as to the status.  Stay tuned for further actions — because a woman’s work is never done.